Learning German – A Better Choice Or Mandate? - A Home For Expats 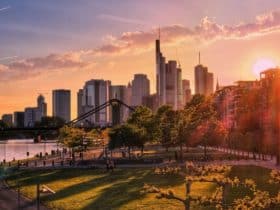 Top 5 cities to live and work in Germany

Ludwig Wittgenstein famously stated – “The limits of my language mean the limits of my world.” Now, you’ve decided to expand your world beyond the boundaries of your country to Germany, does that mean your language limit has to be expanded by learning German? This question is always the first point of apprehension in the plan to migrate – Do I need to learn German before moving to Germany? so, the below article will give you the insight on the language aspects required to live in Germany.

How far can you make without knowing German in Germany?

German is the official language of Germany spoken by over 95 percent of the country population. English comes as the first foreign language taught in German schools. More than half of the German population speaks English to some extent, with a much higher prevalence in popular tourist areas, making English more common in Germany in comparison to other European countries.

In major cities like Berlin, Hamburg, Frankfurt, and Munich it would still be comparatively easier to get by with English. But, as you move out of the main cities to smaller towns or villages, the popularity of English will only decrease, especially in communication with the older generations. This can sometimes create complications in renting houses, cars, or getting bus routes. Though these can be definitely achieved by googling stuff it can be perceived as an annoyance rather than a conversation for some folks if you keep putting the phone in their faces. Also, you cannot always trust the network reception for it to work.

If your plans of staying in Germany are short and mostly limited to the major cities, it’ll be easier by knowing only some basic German phrases (or Google translate). However, if your plans include moving to Germany for the long term, learning German can help in making your life more convenient.

Learning and communicating in German will primarily ease your daily life activities but in addition, will also be the gateway to understanding the country and its people better. Just as listening to people conveys their emotions more accurately than reading, a frank conversation in the language will give you the intended impression behind a statement.

Learning German will help you in getting involved locally and give you a cultural understanding of Germany. Not only that but as an expat working for clientele based on and in Germany, knowing the language of your business partners improves your relations and therefore your chances for effective communication and success. Attaining proficiency in German will help you to function productively for an employer with traditional business connections. In Science and Research, German is the second most commonly used scientific language. Germany is the third-largest contributor to research and development and offers research fellowships to scientists from abroad.

But, it still remains a personal choice and depends on the lifestyle you would choose on moving. As some expats do manage to live in Germany without mastering the language. As the foreign population is increasing every year in Germany, people tend to switch to these for basic necessities. Many people simply switch to English speaking doctors or stores and restaurants with English speaking staff. There are also instances when new learners struggle to communicate in German and people themselves switch to English. Many expats claim their jobs are centered within English speaking populace and they comfortably get through their everyday lives without knowing a lot of German.

For some expatriates, there may be a requirement to attend an integration course and learn basic German. Permanent residence permit also requires knowledge of German to some extent, and for German citizenship by naturalization, you need to hold at least a B1 proficiency certificate in the German language.

There are a limited number of jobs in Germany where a decent level of the language might not be expected, as the company itself works in English. But sometimes not speaking the language might restrict your options for work, even after adequate professional qualifications.

There are institutions that offer instructions and examinations for German proficiency worldwide, making it possible to get certified conveniently in both Germany and abroad.

There are multiple examinations and certificates that can attest to your German language skills. Your choice will be dependent on the reasons for seeking a German language certification (to study or work in institutions that require German ability or to apply for a visa, residence permit, or for German citizenship).

The proof for German B1 and above level proficiency required by the Common European Framework of Reference (CEFR) for Languages, can be attained by providing any of these documents:

In case of not having these documents, you can complete a government language test that may be administered by your citizenship authority.

The following institutions provide the certifications for German proficiency in Germany that is accepted widely in the country.

The Goethe-Institut certificate (Zertifikat Deutsch) is recognized worldwide as a German language certification and is widely used in Germany for a visa, residence permit, and citizenship applications, as well as for university entrance requirements.

The European Language Certificates offer language certifications in 10 different languages one of which is German. Their certification is internationally-recognised and is also accepted in Germany for visa, residence permit and citizenship applications.

The TestDaF is a language test for foreign learners of German who plan to study in Germany or who require recognised certification of their language skills. The test can be taken at licensed Test Centres in about 80 different countries.

This German language certification is specifically aimed at those who would like to study at, or work in, German universities.

Participants all take the same exam and are graded levels 3 – 5, which broadly correspond to the CEFR levels B2 – C1. More information about the test structure can be found here.

The Deutschtest für Zuwanderer (DTZ) certification is a designed specifically for immigrants in Germany and is usually taken after the completion of Integration Courses.

The German language proficiency corresponds to the levels set out in the Common European Framework of Reference for Languages (CEFR) for language learning.

The framework specifies different ability levels and is generally defined as: A for beginners, B for intermediate levels, and C for advanced levels.

Level A1: Beginners and False Beginners

Completion of this level certifies that you can understand & use familiar everyday expressions such as introducing yourself & others, asking & answering personal details, such as where you live, people you know, and things you have. This basically implies that you can interact in a simple way, provided the other person talks slowly and is prepared to help.

Achievement of this level attests your ability to understand sentences and frequently used expressions related to areas of most immediate relevance (such as your day to day conveniences including very basic personal and family information, shopping, local geography, or work stuff).

You can easily communicate about simple and routine tasks with basic and direct exchange of information on familiar and usual matters in simple terms.

This level certifies that you can understand the main points of clear standard language on familiar matters regularly encountered in work, school, leisure, etc. You can deal with most situations likely to arise whilst traveling in an area where the language is spoken.

You can also produce simple and connected text on topics which lie in your familiarity or of personal interest. You can describe experiences, events, dreams, hopes, and ambitions, and briefly give reasons and explanations for opinions and plans. Completion of this level means you are ready for the Zertifikat Deutsch (ZD) exam.

By the end of this level, you will be able to understand the main ideas of complex texts on both concrete and abstract topics, including technical discussions in your field of specialization. You can interact with a degree of fluency and spontaneity that makes regular interaction with native speakers quite possible without strain for you or them.

You can produce clear, detailed text on a wide range of subjects and explain a viewpoint on a topical issue giving the advantages and disadvantages of various options. This implies your readiness for the Zertifikat Deutsch für den Beruf (ZD Beruf) exam, and for strong learners, the Zentrale Mittelstufenprüfung (ZMP).

Completing this level ensures that you can now understand a wide range of demanding, longer texts, and recognise implicit meaning. You can express yourself fluently without much obvious searching for expressions. You can use language flexibly and effectively for social, academic, and professional purposes.

You can produce clear, well-structured, detailed text on complex subjects, showing controlled use of organisational patterns, connectors, and cohesive devices just like the native speakers. You should be able to pass the Zentrale Mittelstufenprüfung (ZMP) without trouble.

Reaching the end of this level certifies that you can easily understand virtually everything heard or read. You can summarise information from different spoken and written sources, reconstruct arguments and accounts in a coherent presentation.

You can express yourself spontaneously and precisely, differentiating finer shades of meaning even in more complex situations.

Some websites to learn German:

Preply is an online educational platform that pairs students with private tutors remotely via online chat. You can take the lessons from 6 € per hour

Dining in Germany – Just as fine as Germans do

4 Ultimate ways to settle in Germany